Just a dream:
Back at work in the mornings, relaxing and watching TV. Don’t worry, the tube production is of course continuing - and now with an even higher yield and in top quality. We have developed to order an intelligent automation system that displays all important details of the camera-controlled production displayed on a big screen ... and action!

Especially when it comes to high-precision results, it is an unbeatable production advantage to keep an eye on everything. It is not without reason that we have installed a big screen as an “eye-catcher” above the all-electric tube processing cell. Our processing technologies form the heart of the transfluid® production cell, but the monitor brings invaluable information into the hall: one after the other, energy consumption, the CPK value, the number of tubes processed so far and the currently produced component are displayed.

The continuous presentation by production TV enables an optimal, high-quality production quota. Maximum safety and a high yield can be ensured and the quality of processes and results documented and proven.

Various air-conditioning lines are produced in the manufacturing cell. Large variances in both the tube length and diameter require highly flexible equipment. With some of the products, components are also applied and fixed, such as flanges. The produced air-conditioning lines have forms with extremely tight tolerances. In addition, all components are formed on both sides, thus a processing of the second side is necessary after the bending process for some components. This also means that the second side is first cut chiplessely and then formed. 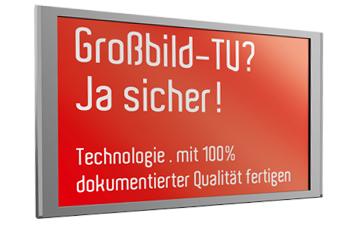 For this purpose, our tube processing cell has a loading magazine, a fast 4-axis handling system, two all-electric combination machines consisting of three axial forming stages with a rolling unit for chipless cutting and forming. In addition there is a powerful bending machine, a chamfering unit, a dot matrix printer as well as two robots and the camera control system.

During the production process a tube forming machine always processes one side of the tube before the bending procedure in combination, while the other tube side is cut chiplessely after the bending procedure and then also formed. Where necessary, the robot then holds the processed tube in a deburring device. Both ends can of course be checked visually with a camera control system. The corresponding robot then places the component in the OK or not OK tray. Alternatively, the robot holds the tube in an inscription unit. It then marks it – without a clamping device – at all positions.

After the processing in the cell, the tubes may be loaded in an axial machine if necessary. The feeding is carried out here via a rotary table. This separate machine also enables the connection of two tubes. This way, complete components are provided directly after the cell processing. Overall, our specially developed and tuned automation system for air-conditioning lines offers the ideal solution for reliable control with simultaneous maximum production efficiency and production safety.