A robot hold a tube, bends it and then takes it out of the cell! The heading could be this simple. Everything is true and it tells us everything. The technology behind it, however, is considerably-more subtle.

With this impressive project we were faced with the task of bending, separating and controlling tubes with a length of 4,500 mm having nearly 50 bends in a time of less than 150 seconds. Some additional challenges already appeared from the very start: the tubes were already formed, provided with flanges and had diameters from 8 to 22 mm. The bending process itself necessitated a right/left bending technology and elaborate tube-specific programming should be eliminated. This gave rise to our current fully automated bending cell to the full satisfaction of our customer.

The installed loading magazine securely separates thin tubes in lengths of up to 6,000 mm, even if they

are loaded in bundles. Since the tubes are only slightly stressed, the existing forming is safely preserved. Then the orientation of the flange to the bend takes place. This is performed in a safe positioning process. One of the two robots then removes the pipe from the separating process and transfers it to a special collet. This chuck can hold the pipe in a variety of different positions. The collet rotates the previously oriented flange to the correct position according to the isometry.

The overall bending process is performed by two robots. This is necessary, because it is the only way to achieve the quick cycle time and the necessary range for these long tubes. Both robots are equipped with right/left bending heads, each of which has two bending levels. The robots begin with the bending at the end of the tube and can also slide the tube in the holder. It is also possible to drive the chuck servo electrically – both axially and radial. The result is unlimited bending freedom.

While one robot positions the finished tube on a storage rack, the other is already collecting the next tube from the separation unit. The cycle time for a tube with 47 bends is a mere 140 seconds – which of course includes handling.

An additional decisive advantage of this specially developed transfluid® pipe bending line: isometric data can be processed directly online by the robots. This eliminates the need for product-specific robot programming. This currently implemented bending technology with robot handling can be used for steel pipes up to 22 x 2 mm. 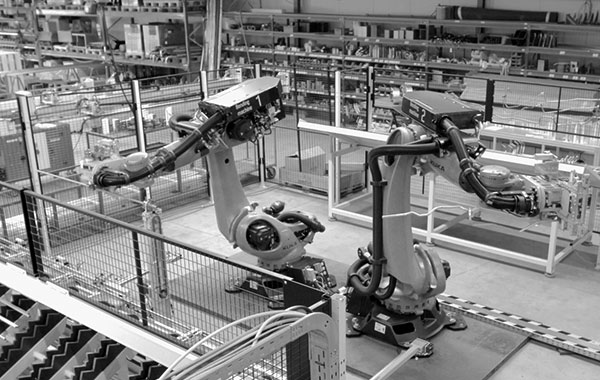