Automation is in our nature.

Mechanical engineering with a unique selling point in the field of tube manufacturing.

In addition to Industry 4.0, automation and robotics are currently the major topic and growth sector in mechanical engineering. Humans have been dealing with automation for several thousand years. Named after the Greek goddess Automatia, Aristotle in ancient Greece already thought about how nice it would be if the weaving shuttles did their work without human intervention. The topic really took off throughout the textile industry in the last third of the 18th century and Henry Ford famously advanced it in 1913.

The mechanical engineering company transfluid came across the issue of automation quite early in their 35-year history. Having started with the development and production of tube bending machines they quickly came into contact with a wide variety of industries, where automation, efficiency and productivity are crucial in order to remain competitive. transfluid began early on with the simple interlinking of tube bending systems in sequence-controlled production processes for the automotive industry and supply technology. Customer wishes and requirements increased steadily and transfluid developed into one of the leading international manufacturers of special machines in the field of tube production.

One aspect that led to this was the growing product range, which in addition to t-bend, the division for bending tubes, was expanded to also include t-form for tube end forming and t-cut for tube cutting machines. The portfolio is completed by various handling, loading and unloading systems, as well as production robots.

The complete package too, when it comes to the production of tubing. This complete package even got its own name, t-motion automation systems. Similar to a modular system, customer-specific combinations can be easily implemented.

In a real-life project, for example, nine different transfluid machines and a handling robot were connected to form a production unit. However, the requirement for the system was not the production of just one component: the first step was the production of seven different components with different geometries, lengths and tube diameters of 7-28 mm. Bending, punching, deburring plus various types of final forming were required.

This variety called for different loading systems. Diameters of 7-12 millimeters can be fed directly into the process from a coil and freed from ovality and curvature via a 3-stage straightening unit. Larger tube diameters are brought into the production process from bars, with a length of up to 5 m via a loading table and, like the coil versions, fed into the orbital tube separation system RTO 628.  Little burring, clean and, above all, chipless, it cuts the tubes and transfers them directly into the subsequent process. In order to ensure fast cycle times, it also has a sorting device for tubes of up to 8 different lengths. An advantage that results from this is that when switching to other sizes, production can continue, while the feed and cutting systems are switched, minimizing any downtimes.

The bending programs can then be called up in the subsequent process via QR codes lasered onto the tubes.. It is also possible to change the bending geometry for tubes of the same diameter during the operation. In this way, even small series or individual pieces can be produced without stopping.

The heart of the system is the CNC-controlled bending machine optimized for efficiency and flexibility. Equipped with a rotatable bending head, it can be equipped simultaneous with a multi-level bending tool and a punching tool. Only the bending mandrel needs to be changed, when switching tube dimension. This takes a maximum of 2 minutes with the quicklock system. Using a handling robot, the bent tubes are transferred to a REB forming machine, which gives the tube ends the perfect shape, with up to six forming stages before they are returned by robot for another punch or handed over to logistics.

If the bending machine is the heart, the in-house software t-project is the brain. Its unbeatable advantage is that all machines integrated in the process can be controlled by using a single software platform. The more complex and diverse the processing stages of an automated system, the simpler and more functional the control and monitoring must be. It was also important in the development of the software that it allows the integration and automation of third-party products.

t-project already offers the possibility of a digital twin in advance, which reproduces and simulates the functionality of the entire process. The workpieces go through all phases of the production line in a virtual environment. This enables the efficient optimization of all production-relevant factors. This means that in the real production process, all material and data flows can then be monitored and networked with warehouse management, quality control and logistics. In other words, completely automated and transparent for all departments involved with all the possibilities of today's process digitization.

However, the software not only enables the control of a machine network. transfluid also builds individual production cells according to customer requirements, where t-project takes over the control. We design automation systems taking into account all factors relevant to production technology. All components are perfectly matched to each other and preconfigured to the infrastructure of the production environment.

Modern production technology is constantly facing new challenges. In addition to ensuring the manufacturing of a high-quality product, another point is essential: in order to remain competitive, a cell is required to manufacture products in the smallest possible space, with many processing steps and in the fastest possible time.

Today's world offers unlimited possibilities for integrating components. In addition to challenges such as hot bending, in which the workpieces are first made to glow via induction spindles, or optical measuring systems that ensure quality during production, there are always new interesting challenges for which transfluid engineers will find a solution.

transfluid is a valued partner all over the world for the production of tube bending and tube processing machines. transfluid have been developing their customer-focused technologies for tube processing since 1988 and offers tailor-made solutions for the construction of plants and machines, for the automotive, energy and shipbuilding sectors and the manufacturing of medical equipment. 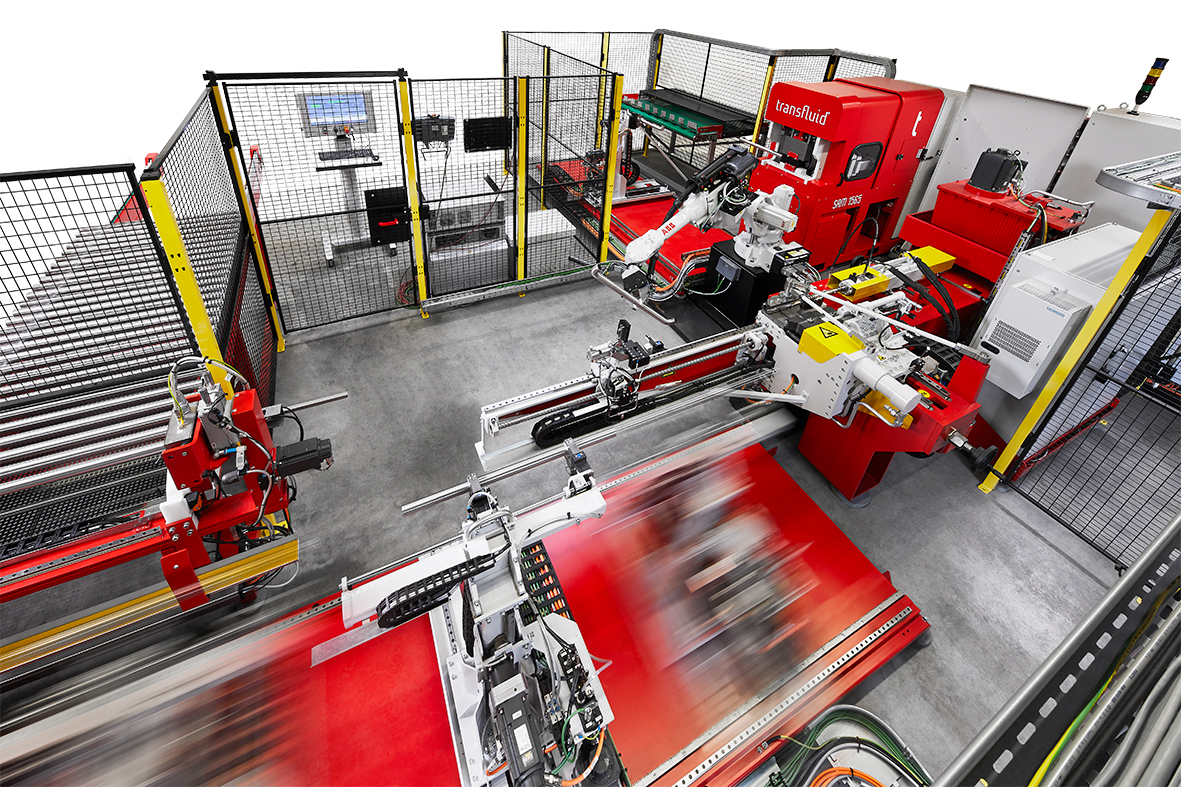 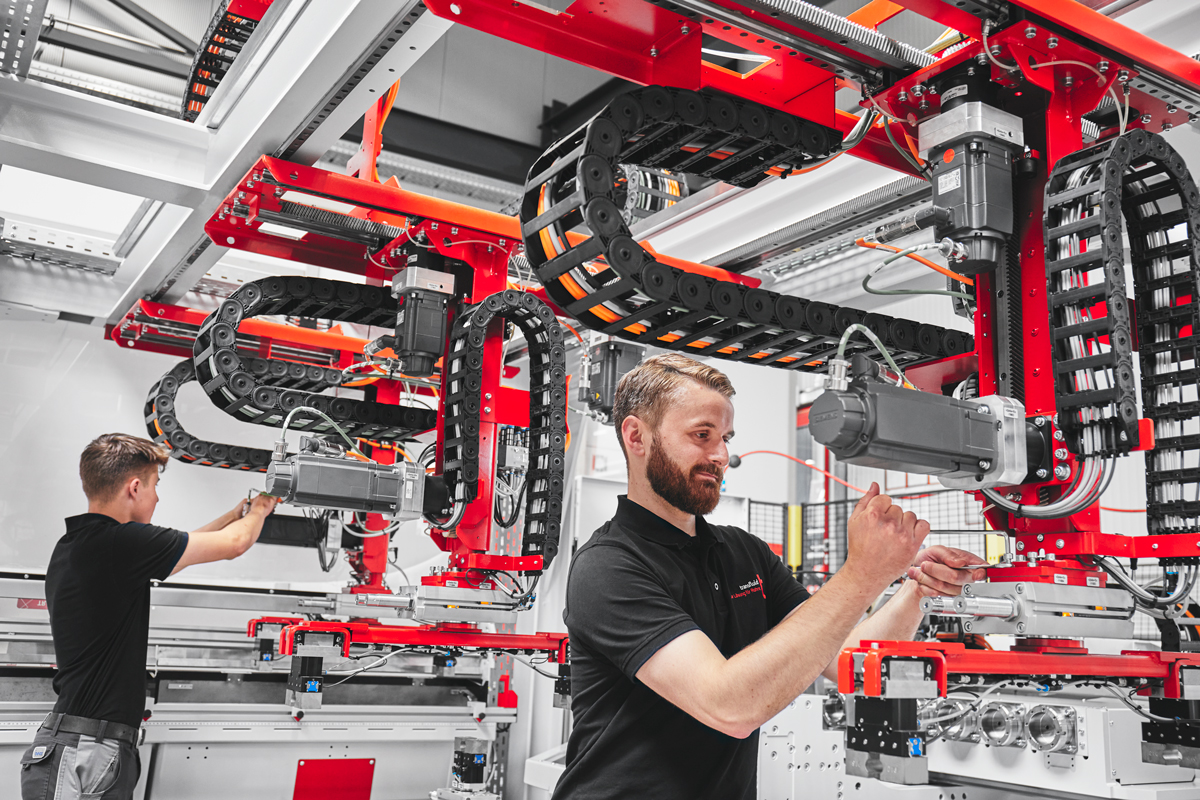 Assembly of a fully automatic production cell with overhead handling at the Schmallenberg site. Tube machining at both ends, 4-fold bending process and optical inspection system for component control. 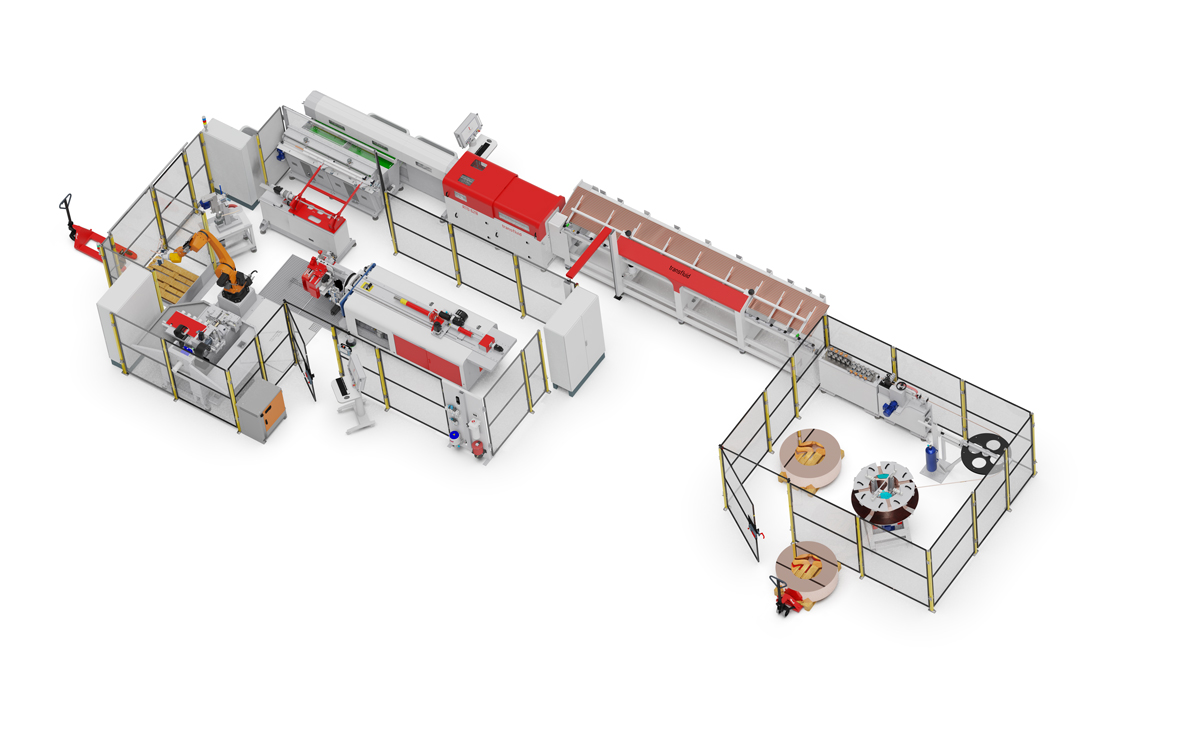 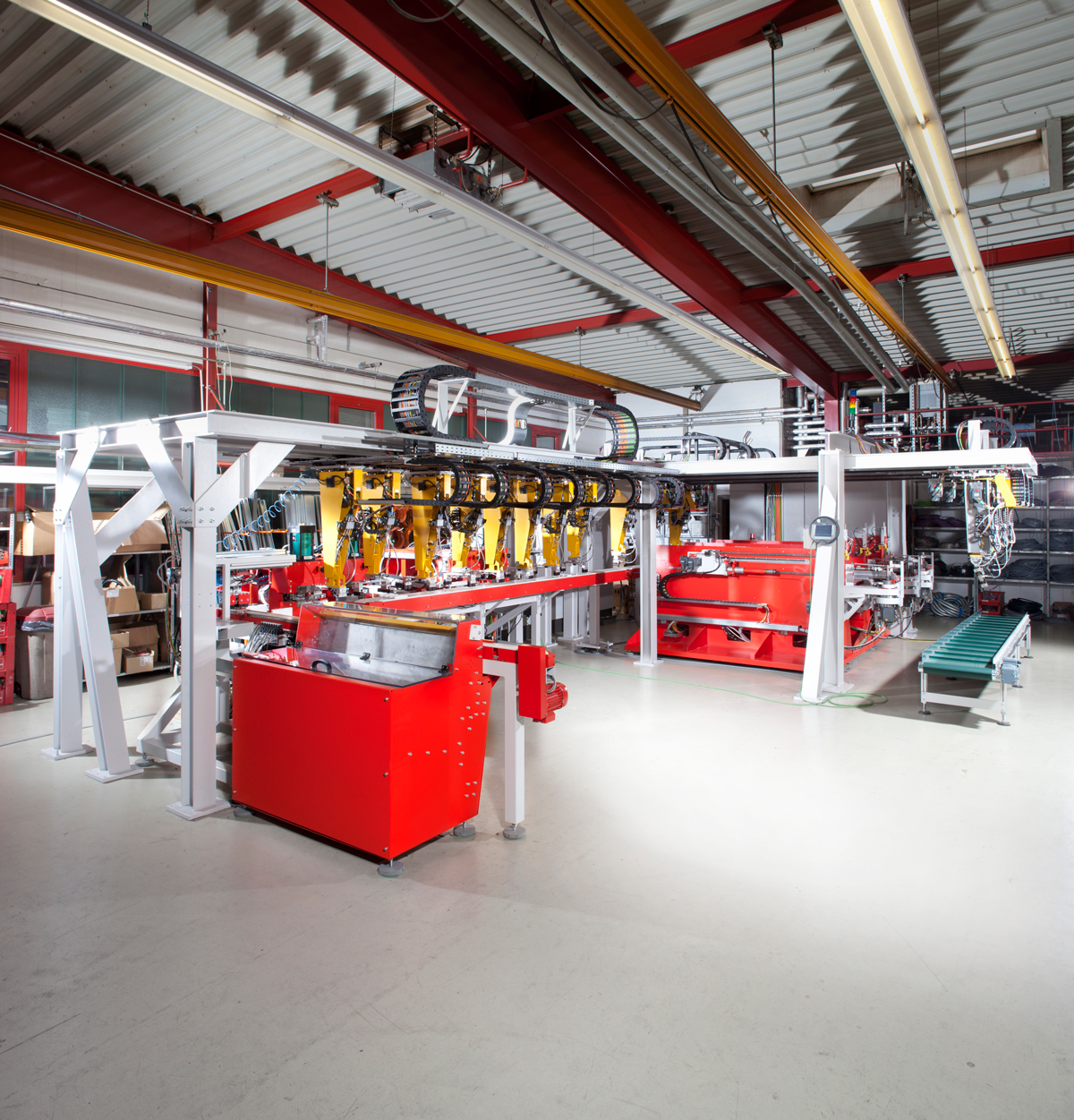 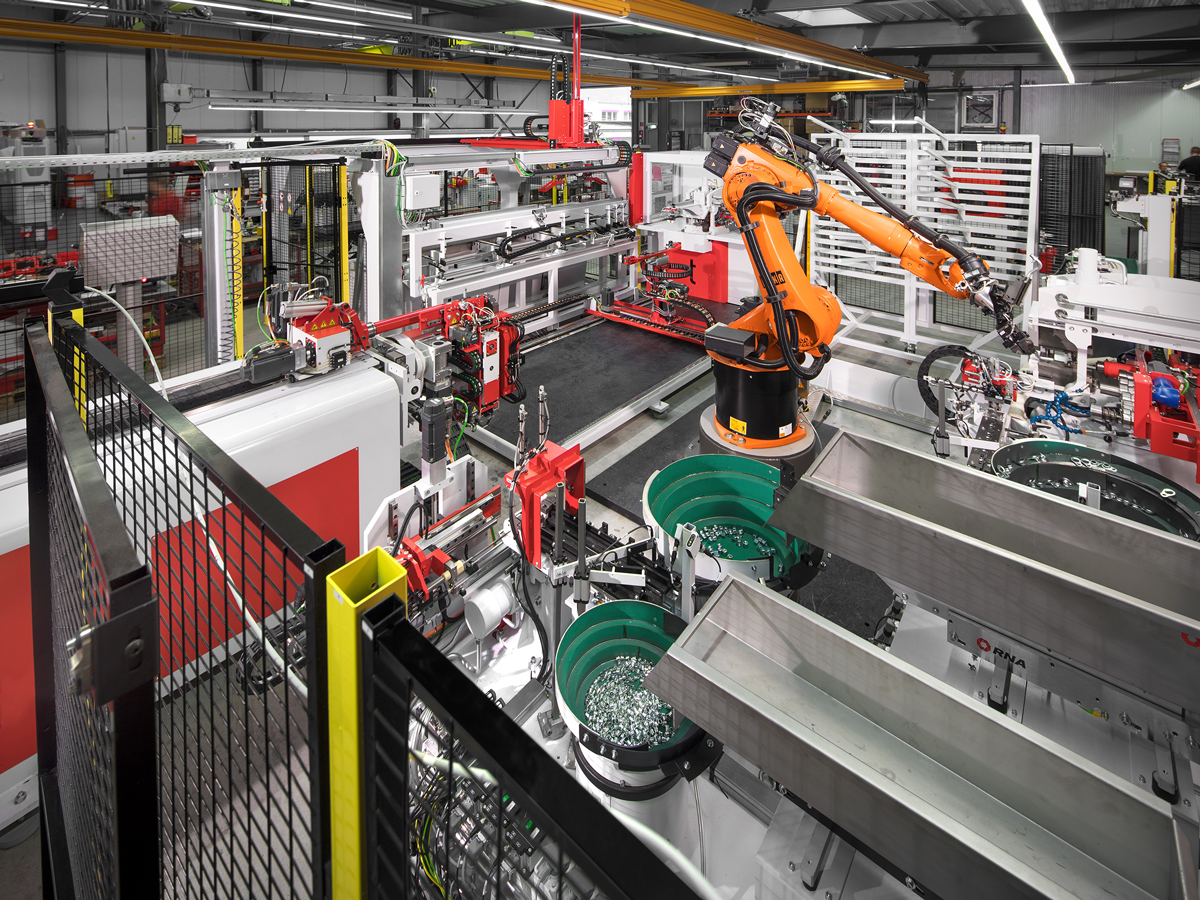 Everything included: Automation system for the processing of chromium VI-free coated tubes, as well as tubes with powder-coated surfaces, cutting ring and flange assembly, insertion of hose beads and the right-/left-bending further processing of the tubes.