Demand determines the market. It's an incontrovertible fact. If the markets are always moving faster – as is the case today – as a supplier of optimal solutions we must be able to react more quickly. The same goes for our suppliers. However, sometimes the economy reaches heights where the air gets extremely thin for certain suppliers. This is a shame,     because we live in a time in which personal dedication is well rewarded by the markets. So then, let's tackle the problems and move faster!

An economic downturn has seldom been so rapid or drastic as that of 2008/09. Having said this, the economic upswing also took considerably longer after earlier periods of recession. In 2009, transfluid® only recorded a minimal fall in turnover, thanks to our great team. Even at that time, we were taking on new people in a targeted manner, a policy which we have consistently continued. For us, it was a logical step, as we are working for better times.

With a focus on the future and on upturn, at that same time we signed framework agreements with some of our core suppliers, who provide us for instance with electrical drives and hydraulic and bearing systems. Everything seemed to be in place for the next “high season”. But, however well you prepare, sometimes things work out differently than you thought. In spite of all the foresight and our own efforts, some parts of the supplier markets collapsed. At the end of 2010, important key components could only be obtained with extremely long lead times. In some cases, we had to prepare for delivery delays of up to 26 weeks. Drops in quality and service levels also suddenly became apparent – obvious material deficiencies, order confirmations which took two months to turn up, even complete suspensions of deliveries had to be accepted.

During good times, struggling with such difficulties was a paradoxical situation for us. However, it was also grounds enough to do precisely what the market was demanding: react quickly to retain a good standard and to improve upon it. We continually adjusted our delivery times, re-sorted and optimised our supplier portfolio, and developed some solutions to help our customers reach their goals more quickly, in spite of the tough situation. And we still worked to master the hurdles involved in the supplier situation – some of which were hard even for us to overcome – to the best of our ability and with our customers in mind.

We want our customers to be satisfied and take delivery of their new machines on schedule. Thanks to our clearly stated will to develop the best solutions for our customers, as well as to our commitment on a daily basis to put this will into action, we achieved it too. The situation could conceivably improve in the weeks ahead. Until that time, we would ask for your understanding, if we do hit such a bottleneck. As your proven partner, we will do everything within our power to overcome that situation as well. Until then, the message remains:

tackle the problems and focus on the future! 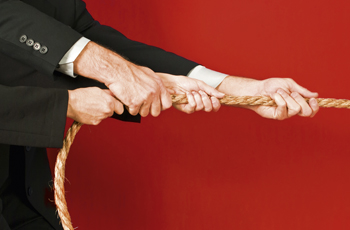